I am a woman of wide skirts — faldas grandes, enaguas as round as the moon. 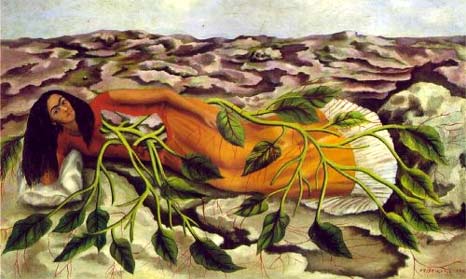 The first time I saw myself was in 1979 in Rey Gaytan’s Chicano art class at the University of Texas at Austin. I found myself in Frida Kahlo’s enaguas, in the tehuanas she made famous.

She reflected my palette of rosa Mexicana and the green of life — and the sepia pricks of the soul that stained my canvas along the way. For a short time, I lived near Frida’s Blue House, and my first and only attempt at a novel begins there.

Pioneer Chicana muralists brought Frida Kahlo to Chicanas and to the United States in the 1970s. Thanks to the muralists and Hayden Herrera’s pivotal biography “Frida” (Perennial, $25), she was later embraced by gay San Francisco, feminists and art collectors, painting the way for the eventual Fridamania and the biopic “Frida.”

Frida was the original “bomb” — Andre Breton called her “a ribbon around a bomb.” The movie is more ribbons than bomb, beautifully filmed but, as Guilliermo Gomez Pena recently said, “Frida Lite.” Frida was handsome — not a vixen like Oscar-nominee Salma Hayek, who portrays Frida’s passion and sexuality more than her art or politics. Frida’s face was often taut with pain. She was blackbird beautiful and lived like a peacock.

She would likely mock the “gringos” for now making faux Frida jewelry and charging $200-a-plate fund-raisers in San Antonio as they prance in huipiles (indigenous blouses), but dare they paint themselves in her famous brow and moustache? In the early ’90s, Chicanas protesting a Frida movie that was to star a non-Mexican marched down Hollywood in huipiles, brows and moustaches.

I never wanted to be like Frida la sufrida. But when I found myself on a doctor’s table with 27 needles down my spine and then a year of barely being able to walk, I certainly felt like the suffering Frida. She depicted her spinal column broken and held with nails as a result of a trolley car accident and many subsequent operations. That I identified with Frida spoke to how much she has become part of the Chicana psyche. No wonder psychologists employ her images in therapy.

The operation on my back complicated a severe auto immune disorder that I fought for five years. One doctor told me I would never be healthy again. I told him he was wrong. I healed with the medicine of the Earth and the balm of woman courage I learned from indigenous people who faced land invasions, rape, torture and massacres in Mexico.

I befriended one of Frida’s contemporaries, Benita Galeana, a freedom fighter who also dressed in huipiles. I’ve often said she lived the life Frida idealized. Both were women of eyebrows and moustaches, writes Mexican writer Elena Poniatowska. Benita also used a corset to support her spine from a car accident and the beatings she received as a revolutionary. Frida and Benita helped me understand that to be courageous doesn’t mean you don’t have fear. You fight and struggle despite it. Benita once said the fearless don’t always know the consequences of their actions and that “courage is an illusion.”

But to fight our fears makes us courageous. We begin to trust the power of our lives and to live with confidence as women. We suffer when we believe we can’t change our destiny.

Frida was courageous because she painted her sufrimiento, choosing to transmute its form rather than to endure its fate. She put it outside of her body, her biochemistry floating all around, painted to the cellular level with microscopic precision. By painting her suffering, she proclaimed her strength. How she responded to suffering changed her destiny. Herrera’s biography describes Frida’s last painting — of watermelons. Despite immense pain as she neared death, “(S)he wrote her final salute to life: VIVA LA VIDA.” Long live life!

A week after 9/11, I went to a San Antonio post office and asked for a Frida stamp. A worker told me they had agreed among themselves to stop selling Frida’s stamp and that he personally refused to.

“She was a communist,” he proclaimed. I bet you didn’t know that, he prodded, and then looked me up and down. I was wearing a huipil and a wide skirt. Everyone in the crowded room went silent lest they be called unpatriotic.

“Yes, I knew that. She was many things, a great painter, a human being. She stood on the side of the people.” Frida would have enjoyed the exchange.

Patrisia Gonzales is a traditional healer/midwife and professor of Mexican American Studies and American Indian Studies at the University of Arizona.[1][2] Gonzales is a granddaughter of Kickapoo, Comanche, and Macehual peoples who migrated throughout the present-day United States and Mexico and has taught about the ways in which Indigenous medicine and Western health care can be complementary, both nationally and internationally.[3] She was formerly a Distinguished Community Scholar at UCLA‘s César E. Chávez Department of Chicana and Chicano Studies and Regent’s Scholar at the University of California, San Diego.

She first wrote this essay for The Native Press in 2007.