Keepers of the Stronghold: Lakota are once again defending Ghost Dancers’ burial places 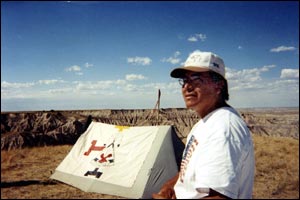 When the Ghost Dance arrived in 1890, Lakota danced to bring back the buffalo and a good way of life. They were persecuted and fled to the Badlands to a place Lakota call “Oonakizin,” or the Stronghold.

“Here, they made their last stand. It was the last pocket of resistance for our ancestors and their families,” said Ed Two Bulls, Jr., Oglala Lakota.

Men, women, children and old people were fired upon by the Home Guard, now the South Dakota National Guard. When the bullets stopped, at least 70 Ghost Dancers were dead.

“It is said that the militia went upon this plateau and threw frozen bodies off of the sides of the Stronghold Table.

“My grandfather was a Ghost Dancer and for that he along with Kicking Bear was sent to prison,” Two Bulls said.

From his home on Red Shirt Table, Two Bulls faces the Badlands, where his grandfather was a Ghost Dancer. Today, his wife Lovey and sons Tony and Ernie carry on patrols to protect the massacre site and the Ghost Dancers resting in shallow graves from the onslaught of a fossil dig.

Lakota are now planning to gather on the Stronghold June 21.

Jim Toby Big Boy, among the Oyate organizing expanded resistance camps, said new camps are being established at the entrances to South Unit of the Badlands National Park.

“On Stronghold Table, the Lakota Grassroots Oyate continue to protect the Sacred Site where eighty women, children and men were killed and pushed over the edges of Stronghold,” Big Boy said.

“Today, the Oyate do not want to negotiate with National Park Service on any further agreements pertaining to the Badlands South Unit.

“The 1976 Memorandum of Agreement between the Oglala Sioux Tribe and the National Parks Service is dead. The National Park Service has violated an agreement, and that is a clear violation of a Treaty. The Land must be returned to the Lakota People.”

In the 1940s Lakota were forced to move from their homes in the Badlands when the U.S. military used the land for a bombing range.

“This land does not belong to President John Steele or the Tribal Council, it belongs to the people. If the National Park Service wants to meet, they will have to include the grassroots people too. And they will come to us,” Big Boy said.

For the second year, Oyate Lakota are prepared to defend the gravesites of the Ghost Dancers from the planned fossil excavation of the National Park Service.

The traditional Tokala Society (Kit Fox Warrior Society) has manned the resistance camp on Stronghold Table, the mesa that overlooks the Badlands.

It has been a long, cold winter since August 2002, when Lakota traditional societies met with the National Park Service at the resistance camp and told them, during a daylong confrontation, to clear out of the Badlands.

“We want the National Park Service out of the Badlands!” George Tall, Tokala Society, told the Badlands Park Service. His comment came on a guided tour of the proposed site that Lakota said was insulting to them and their ancestors.

With sharp reactions, traditional elders and young people, joined by Indian activist Russell Means, told Park Service officials that the memorandum of agreement, allowing them to operate the park here on Oglala tribal land, was null and void.

Park Service officials, however, did little more than snicker.

It was just last spring, when the first of the Ghost Dancers’ bones made its appearance on a steep slope down from Stronghold Table. The thighbone of a young woman, about five feet tall, was found by a Lakota walking in the Badlands.

Ed Two Bulls asks, “Was it just a coincidence that the thighbone of this woman emerged just months before the fossil excavation was to begin?

“This dig was to be going on for three years without the permission of the Oglala Sioux Tribe.”

Two Bulls believes the thighbone emerged from its shallow grave for a reason.

“Wakan Takan had a plan for this good Lakota woman and although she has been gone for 113 years the purpose of her life and death on this earth has been fulfilled. She has returned in the form of her thighbone to give the Mako Sica back to her people.

“We are the keepers of the Stronghold Dream.

“We are camped on top of the Stronghold to protest what the National Park Service is planning to do and come what may we will protect the bones of our relatives, the Lakotas and our friends and allies, the Cheyenne and Arapaho.”

What has emerged here is more than the protection of the gravesites of Ghost Dancers, it has become a fortress of resistance, an anchor in a world out of balance.

Last summer, Lakota youth rode horseback here late into the night, elderly came with their stories, women and men came with soup and bread for those who patrolled and watched with binoculars, for the unexplained helicopters, late into the night. Those who camped here said they were held by a powerful force of spirit.

“It captured my spirit,” was often said.

Spirit, however, is not what paleontologists are here for.

Two Bulls said since the late 1880s the South Dakota School of Mines and U.S. government have taken millions of dollars worth of fossils out of these Badlands with no kind of benefit going to the Oglala Sioux Tribe.

The excavation is to take place right in the location where there are burial grounds, tepee rings, prayer rings, fire pits and other sacred sites. The disregard, disrespect and arrogance are unbelievable, he said.

“We all know what the Ghost Dance was about. It was a dance that the Indian people would bring back the buffalo and a way of life that was so good for the wandering Lakota.

“In a trance they would travel to the Spirit world and visit and mingle with departed loved ones. The Dance terrified non-Indians so the United States government decided they were going to put a stop to this terrorism.

“Ghost Dancers were pursued and arrested and persecuted so they fled to the Badlands to a place called in Lakota Oonakizin or the Stronghold.” 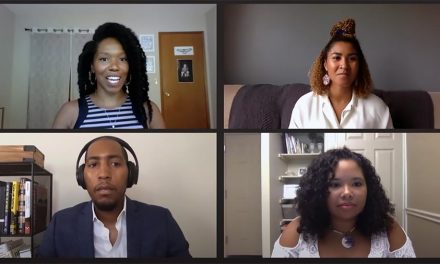 What it means to be Black and Native in America

The occupation of Alcatraz: Don’t give us apologies. Give us what we really want.